Stove fans increase the heat produced by wood burning stoves by circulating the warm air directly into the room. Heat is therefore transferred by convection as well as radiation. This is claimed to heat an area more quickly and reduce the amount of logs required. 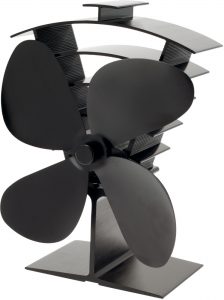 Most stove fans use a Stirling engine which uses the  heat of the wood burning stove to drive the fan. The Stirling engine was invented in 1816 by the Scottish inventor Robert Stirling. The fan is powered by the engine which is solely powered from the heat of the stove, the engine is powered by rapidly heating and cooling the same volume of air. When the air is heated, it expands, pushing a piston upward; when the same volume of air is rapidly cooled, it contracts, pulling the same piston downward, providing power.  This expansion and contraction can operate at up to seven time a second, depending on the heat of the stove.

There are less expensive fans on the market which utilise the Seebeck effect. Seebeck a German physicist discovered that electricity is generated when two dissimilar metals at different temperatures meet. This type of stove fan heats the metal at the bottom of the unit which transfers the heat to a spring. At the top of the unit the fan cools the stove fan’s top surface. The difference in the temperature triggers the spring which brings the metals together to create the electric pulse that drives the fan.
The Seebeck fans are about a third of the price of Stirling type stove fans and are highly rated, but they do have an upper operating temperature of 345 degrees Celsius.